“Only two things are infinite, the universe and human stupidity, and I’m not sure about the former.”

Turns out Einstein was better at Physics than jokes.

“In awe I watched the waxing moon ride across the zenith of the heavens like an ambered chariot towards the ebon void of infinite space wherein the tethered belts of Jupiter and Mars hang forever festooned in their orbital majesty. And as I looked at all this I thought… I really must repair the roof on this toilet.”

Sit down and prepare to be terrified. The following picture is of a region of the sky smaller than this full stop. 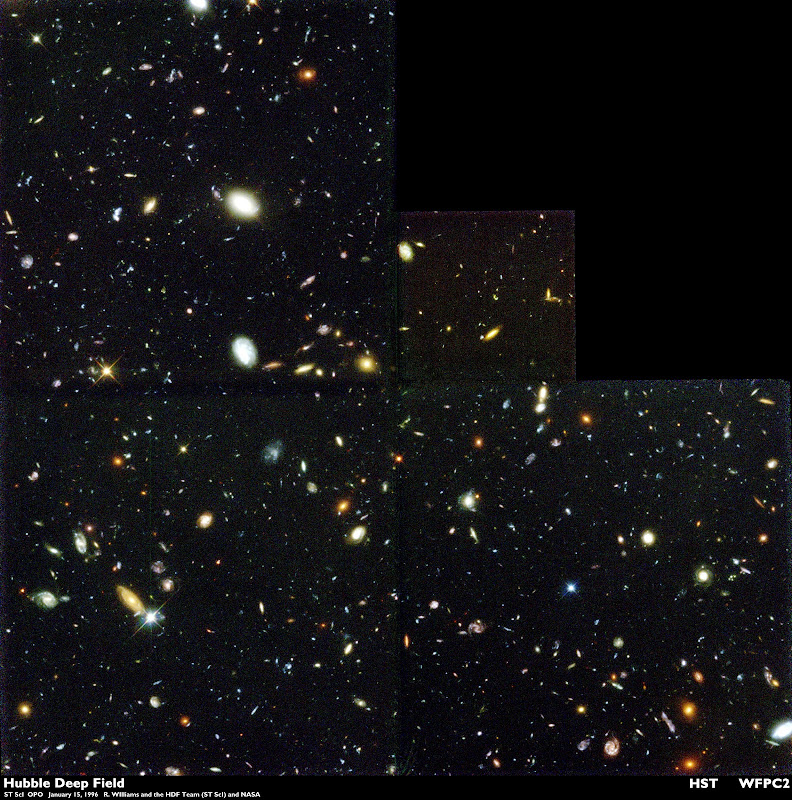 I advise printing this out and looking at it whenever your life blows.

I was sittin’ on the bog in an Odeon on an industrial estate the other day (Prometheus 3D (washout)) and the picture above slipped out of my pocket on to the floor. I looked at it and then caught a glimpse of myself in the mirror, and had an epiphany.

Here endith the front matter and any pretence of humour.

I aim to show that if these two assumptions are sound then we are immortal. Furthermore, if they are true then Hell exists, and your actions have no consequences.

1 You are the motion of material. I call this your Shape.

2 Your shape depends on its environment but part of your shape is unchanged by this process. I call this unchanging part your Essence.

3.1 In an infinite set of randomly arranged finite forms there will be an infinite number of each type of arrangement if and only if the total possible number of objects is finite.

3.2 You and your Essence are composed of a finite number of objects.

3.3 In an infinite set of arrangements of the objects that are contained in your Shape there will be an infinite number of realisations of your Shape and your Essence.

6 For as long as you are possible you are. You are immortal and will always exist if and only if the universe exists.

Every major scientific discovery (starting with realising we have a bum-hole around 1 million years ago) has essentially told us ‘you are less significant and unique than you thought you were’.  Currently, we base our significance on believing we are the only life. Come off it. No serious person does not believe in aliens. The next realisation will be we are not alone. Then we will realise that we are not the only version of us in the universe.

And then I realised it wasn’t an epiphany… it was diarrhoea.