A recount of a tough crowd

I think the worst show at last year’s Edinburgh Fringe Festival was the one I did to a solitary ninety year old man. He’d got lost on his way to the military tattoo. Old people often can’t see very well, and he found himself in/being my audience. They (the elderly) usually navigate in groups. In that respect, they are like penguins, and they huddle together for warmth. If an old person gets separated from the group they will last a matter of minutes. They also enjoy a diet rich in oily fish, but they are poor swimmers.

Anyway, I finished the show and I was swinging a camcorder round on a stick, in an attempt to recreate the sense of excitement at Live at the Apollo (I was hoping to use the footage for my show reel). The man had been politely sitting there for forty five minutes looking terrified. I said ‘well, that’s the end. What did you think? You can leave some money if you think that’s appropriate’. I didn’t scam him. I didn’t say that he needs to replace his roof insulation and it will cost £1500.

Anyway, a bit of the fear went away from his face and he said ‘I fought the Germans in World War II, but nothing could have prepared me for the horror that I just experienced’. I said ‘I’m sorry to hear that’, and I started to leave the stage, and… I tripped up, and fell face first into some nachos, and I looked at the man with a salsary face and said ‘I’m really sorry’, and then my trousers fell down and I farted comically and a little bit of poo poo fell into-the-ankled-pants/onto-the-floor and I could taste a little bit of the sour-cream/salsa/guacamole/beer miscellany and… and… a solitary tortilla chip dropped off the end of my nose, and one corner hit the tip of my penis, and it seemed to spin in slow motion like that man from the Titanic film, and it stuck upright into the little poo poo I was talking about earlier, like a sort of parody of the crucifixion of Jesus Christ our lord and saviour.

Anyway, I was actually quite embarrassed at this point, so I tried to leave the stage, but I slipped on the poo (another bit) and I fell over in such a way that the aforementioned tortilla chip stuck up my rectum. The man, who actually had a purple heart, stood up and said ‘I will never forgive your generation for your decadence’, and he fell off his chair dead, and then my parents, who had come to see my show but had been distracted on their way to the theatre by the Twilight Saga came in and saw the whole scene. I said ‘It’s not what it looks like… Ah, who am I kidding it’s exactly what it looks like’, and then my bum made this noise:
[audio: http://www.raphshirley.com/blog/wp-content/uploads/2012/06/fartNoise.mp3]

Anyway, there’s no need to go into unnecessary detail, but I think that was probably one of my worst shows. 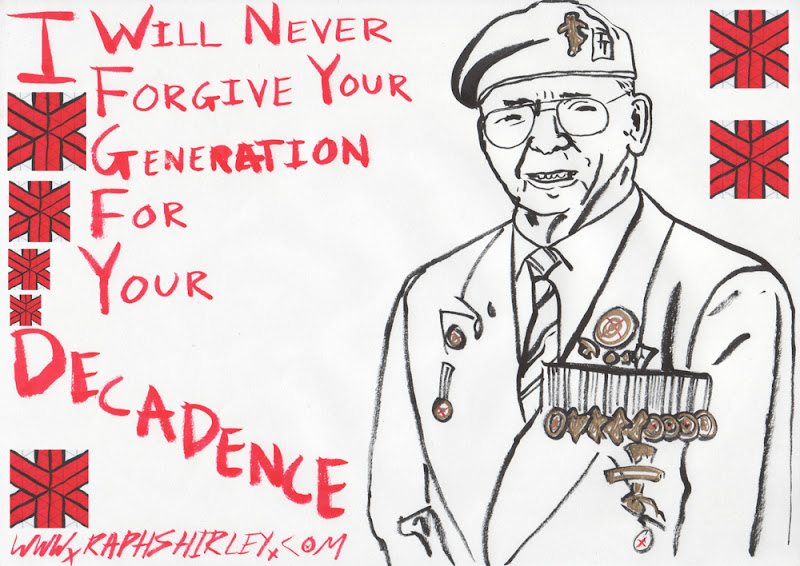 There was one show that was worse than that maybe, but… I dunno, do you wanna? Well, there was this one time where there was no-one there except the barman and I thought – well I’ll do it anyway, so I started to do the show, and then the ceiling started to come down on me and the barman was, like, ‘ah shit’. That was inconvenient, but I carried on, and then the cieling was, like, pressing on our heads, and I said to the barman “maybe I should stop”, and he’s like “no, no it’s cool, its cool”, so I kept going and then the barman’s head actually popped, and I was like “fuck… fuck it… fuck… I’m going to be blamed”, but I thought… I’ll keep going, and I’m a third of the way through, and the cieling is still crushing my head, and then my brother starts growing out of the barman’s neck except he hasn’t got any skin like Robbie Williams in that video, and his mouth is a speaker just saying all this really offensive stuff. It’s like he doesn’t understand our ways but he’s just heard what we find offensive and is saying it all and it’s, like, all the standard racist, and pornographic, and violent, and misogynist, and all that but there is also this stuff in there that seems to get to the real heart of what makes you a pathetic animal, and what means you are not a dignified human being but a sort of rat, and all your insecurities and weaknesses and vulnerabilities, and it is, like, the sort of speech where after you’ve heard it you’ll never be able to smile convincingly again. It completely undermines you.

Anyway, I look at my watch and notice that time has completely stopped. It has slowed down to nothing at all, but this kind of intense pain and shame is swelling inside, and every centimetre of my body is in agonising pain, and… the thing is, when time stops space also dilates… I don’t really understand it, is something to do with Einstein or the atomic bomb or something, but all your skin and anywhere with nerve endings is getting elongated so that my capacity for pain and suffering is increasing. At this point I’m thinking – maybe I will stop the show because this is fucking inconvenient, but I’m not really in control of my actions and I thought – It can’t get much worse than this, but I start to grow new limbs ‘cos during this I was thinking “well at least my body is finite so the pain can only be on my ten digits for instance I could have twenty digits with all this pain. But as I had thought it I did have twenty digits and actually then my thoughts led to more and more body parts until I’m actually infinitely big, and a little side point, I thought back to that Doctor Pepper advert that’s like ‘What’s the worst that could happen?’, and I realised the answer of course is ‘infinite suffering’. Now I say “right, that’s it – the show is cancelled. I’m not doing it any more”, but as I mentioned – I no longer have any control and this is where it really gets rather annoying, and this is what makes this probably the worst show I did, I then start to destroy everything that I love. The worst thing about it is that all the time Rock DJ by the aforementioned Robbie Williams is playing on the stereo. That’s when I thought – maybe my show shouldn’t be listed in the comedy section.

Anyway, it turns out that my mates had spiked my drink before the show with LSD. They had had some careless talk about doing it but hadn’t really been serious. One of my mates, SexyPete99, had thought they were being serious and came to Edinburgh to do it. When you think about it, it takes six hours and two changes to get from Hemel Hempstead to Edinburgh and he did that whole trip alone. It doesn’t bare thinking about.

Love to all earthly souls,

As part of a scheme to promote my forthcoming Edinburgh show, I am releasing an audio recording of last year’s show, Philosophical Investigations. I’m releasing it in six parts starting with the abstract: